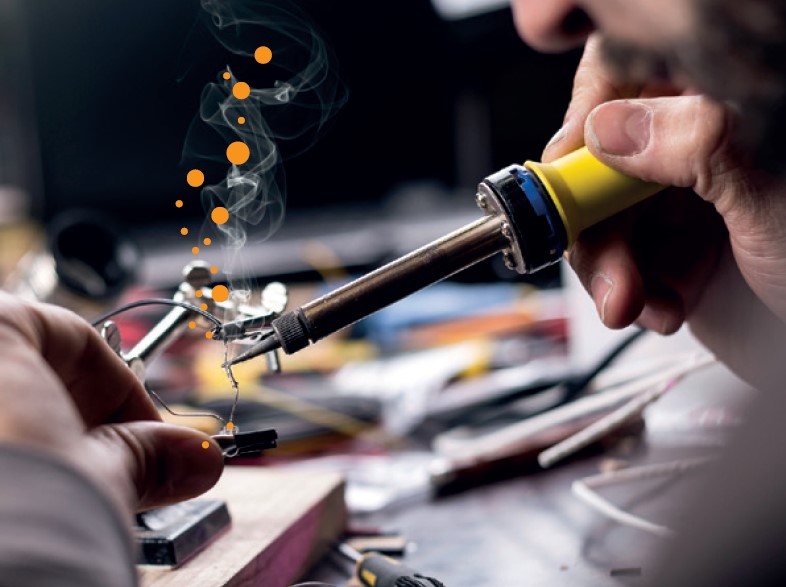 Some dangerous pollutants are obviously visible. Bulk material like gas coming out of exhaust pipes or contaminants discolouring water supplies clearly alter their environments. Some, however, are undetectable to human senses, yet very dangerous to our health.

Nanoparticles fall in that category.

A particle is an incredibly small piece of matter. The prefix “nano” also means miniscule. So, a nanoparticle refers to a minute version of something that is already infinitesimal.

Nanoparticles are a similar concept.

Particulate matter comes in all different shapes and sizes. Some of it can be seen clearly, and some is impossible to view, like nanoparticles. It’s important to classify particles based on their size, because the ones that are the hardest to see are often the most dangerous.

But why is that so?

The dangers of nanoparticles

Nanoparticles are one of the most dangerous types of particulate matter, but not because of their chemical composition alone.

Particles of all sizes pose threats to human health. What makes nanoscale particles more dangerous than larger particles is how difficult they are to detect.

It’s a similar concept to carbon monoxide. Many types of gasses are fatal when inhaled, but carbon monoxide is especially dangerous because it’s colourless and odourless, and therefore impossible to detect without the proper technology.

Nanoparticles are dangerous for the exact same reason. Humans cannot see, smell or feel them at a surface level. They are silent killers.

What kinds of effects can nanoparticles have on humans?

Nanoparticles can exist almost anywhere. Someone could go for a leisurely walk and not realise they are inhaling soot emissions from diesel engines. Or, employees in an office space might have no idea they are exposed to toner dust from printers and other electronics.

Nanoparticles are so small, they can  travel deeply into a person’s respiratory system or blood stream, according to the New South Wales government. This increases that person’s risk of heart and lung diseases and complications, including the following.

In concentrated amounts, nanoparticles can significantly damage a person’s lungs. The damage can result in dead space in the lungs. Dead space, as defined in a study about tidal volume published in StatPearls, refers to the areas of the lungs that continue to fill up with air when the person inhales, but do not contribute to the necessary exchange of oxygen and carbon dioxide.

Pneumoconiosis is a blanket term that refers to many different types of lung diseases, all of which are caused by the inhalation of dust. Dust is often visible, but when it is composed of nanoparticles, it can be impossible to see. Inhaled nanoparticles can lead to interstitial fibrosis, which can then cause several different lung diseases. That includes coal worker’s pneumoconiosis (CWP), which is caused by exposure to coal dust.

Silicosis is another occupational lung disease, as listed by Safe Work Australia. It is caused by exposure to crystalline silica, a substance that is found naturally in Earth’s crust. When industrial workers perform tasks like drilling, sanding, sawing and many others, they can inhale crystalline silica. Silicosis, in many cases, can cause cancer cells to form in the lungs.

Why nanotechnology is important

So, now that we understand how particle size contributes to health risks, let’s talk about how nanotechnology can help professionals find and address nanomaterial.

Nanotechnology helps professionals determine where certain particles fall on the nanoscale. Are they small enough to be considered “nano,” or are they large enough to be less of a risk to human health?

All particles are small in nature, so nanotechnology is essential in determining the average particle diametre and calculating the particle mass. These may seem like minute details, but even small differences in particle size can determine whether or not the assessed nanomaterial is dangerous or safe.

Nanotechnology can also determine how high the volume of particles is in a particular space. Odds are, there are at least some nanoparticles of unhealthy materials in the air almost everywhere we go, so the key to assessing safety is to measure how concentrated the ultrafine particle is.

Particle number concentration is calculated by determining the amount of particles existing in a unit volume of air.

Nanotechnology is not only capable of measuring how many nanoscale materials are in the air and how large they are, but it also can detect the ratio of dangerous nano sized particles to contrast agents.

Lung deposited surface area refers to the number of particles in a measured area that are small enough to be inhaled. The amount of surface area they take up is relevant to how large a threat they pose bsaed on the volume ratio.

When it comes to nanotechnology, quality is key. Missing important details about the chemical composition of the air in a tested area could be potentially fatal.

That’s why Testo’s nanoparticle meters are the best on the market. Our DiSCmini and NanoMet3 are butanol-free, making them much more accurate indicators of the presence of unhealthy fine particles.

Butanol can reduce the amount and size of nanoparticles detected in the air, according to a study on the effects of butanol published in ScienceDirect. Therefore, nanoparticle analysers that contain butanol often do not report accurate concentrations of particulate matter. When this mistake happens, preventative measures are sometimes skipped, and human health suffers.

For more information on nanotechnology and the risks of nanoparticles, contact us today.

Pharma and Life Science
nanoparticles nanotechnology
Previous PostHow an infrared thermometer works, and why it is used
Next PostExplaining NOx Gas